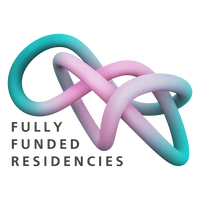 DIMORE is an experimental art residency organized by the Municipality of Padua (Ufficio Progetto Giovani) and curated by Stefania Schiavon, Elena Squizzato and Caterina Benvegnù, with the collaboration of Elisa Pregnolato. The residency brings together a group of young artists (Daniele Costa, Nicolò Masiero Sgrinzatto, Alessio Mazzaro, Eleonora Reffo, Gianna Rubini, Annalisa Zegna) to understand how it might be possible to reconfigure artistic practices and cultural professions during the peak of the Covid-19 lockdown in Italy, considered as a critical moment that unveiled existing precarities.

​DIMORE intends to support and sustain the research and education of the invited artists by providing a space for confrontation where time is slow and expanded and it is alright to not make something new, to produce or to hurry in order to create a finite artwork. The restrictions of the initial lockdown allowed for the term 'residency' to be deconstructed, bypassing the physical cohabitation of artists in a common physical space. The purpose was to recreate a dimension of exchange, reflection and discussion, in which practices and visions are investigated hic et nunc, in an uncertain era that no one can yet define and perceive.

The interview occurred on the 23rd of June 2020, during the first period of the remote residency.

After the first period, the curators and practitioners decided to meet and work in a common physical space in Padua at the end of October 2020. DIMORE OFF - from remote to presence encountered new hindrances because of the second lockdown phase in Italy and reformatted. Instead of a short moment when everyone would be in the same place, the artists share the space by individually spending time working there and exchanging with the group by leaving traces, carrying out interventions,fabricating narratives and passing them on to each other. The shared space is a former shop located near the railway station. The focus of the following phase of the project will still orbit around the notion of “dwelling” as conceived and formulated in the previous phases.

Since its start, DIMORE adapted to circumstances. It absorbed obstacles, included layers, took care of distances and complexities in its becoming.

DIMORE OFF - Civico 10 - interventions of Eleonora Reffo and Alessio Mazzaro
FFR: First of all, I would like to ask you to briefly present yourself so the readers can situate us. All the questions have been thought of by a person that positions himself as an artist, who co-organises sloth-like residencies (which is the first reason why I contacted you), who grew up in southern Italy, but lives in France. But while I’m speaking I’m back in Sicily where I got stuck because of the pandemic.
FFR: Six people in a residency: how and how much is the collective aspect important in DIMORE?
FFR: Yes, what was the criteria used for selecting participants
FFR: And then “being late” in the urgency of supporting artists at that very moment…
​FFR: And in this sense the positive answers from the artists helped you confirm the first intuition? 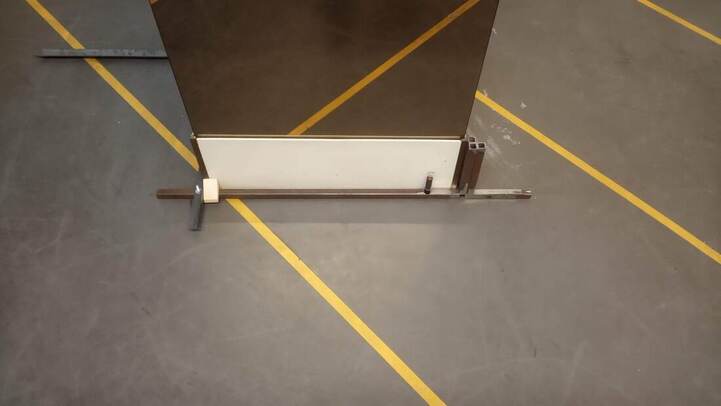 DIMORE OFF - Civico 10 - intervention of Nicolò Masiero Sgrinzatto
​FFR: So trusting the artists, eliminated at least one of the “risk factors”?

FFR: The three of you stressed the importance of a public or “open to the outside” dimension. But as you also said, usually residencies are most of the time associated with what is called “private.” And I would like to stress that I believe that the so-called “private sphere” is the one in which a political practice is the most fragile but the most needed. Was there any interest in this other end of the private-public continuum? The idea of the home, of the dwelling, of the residency, how do you approach it? I understand that being linked to a public institution you have some commitments towards “public space”, but in the moment of the lockdown, was there an interest in bringing artistic and political discourse to the “private space”? 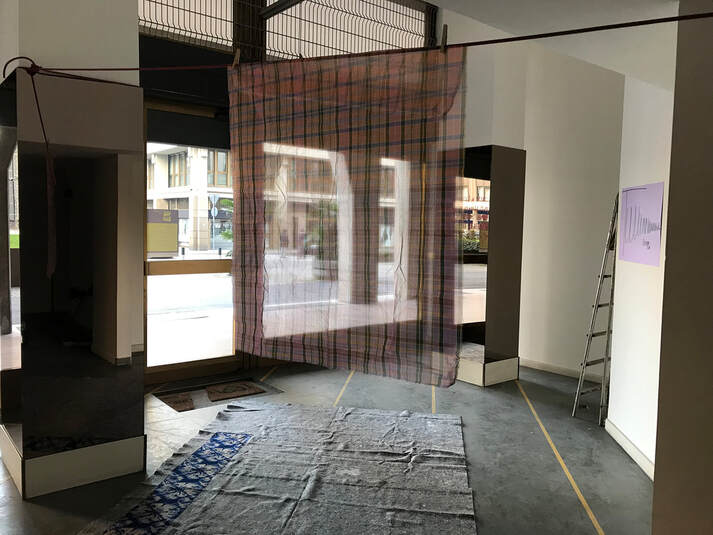 DIMORE OFF - Civico 10 - interventions of Eleonora Reffo and Alessio Mazzaro
​FFR: And about this “public place” you wanted to create, you said that for you it is the website. Have you thought of using social media as another of these “public spaces” in which the residency could be “exposed”?
FFR: Yes, a peculiar aspect of the residency is to avoid production or try to challenge the idea of production in art residencies. How do you achieve that? Can you program un-productivity? How to create conditions that allow it? How to invite it?
FFR: Do you think that in order to allow this “luxury” financial support is the crucial element or are there maybe other aspects or forms of support that allow this hiatus from production and a plunge into research?​
​FFR: Personally I always thought that one element of a residency is displacement. At least for my personal experience, all but one residency I did were not located where I was living, but I always connected ‘residency’ with ‘displacement’. In this case the residents did not displace themselves. What meaning can this bring? A tentative change in the common meaning of ‘art residency’? Or the term ‘residency’ was used for lack of a more fitting word?

FFR: And in your intention was there a will to reconnect the meaning of ‘residency’ to the significance that the word has outside of the art field? Which is a meaning that does not include the notion of displacement, but is rather related to the notion of home?
FFR: Totally.
FFR: Oh I would like to know more about it… 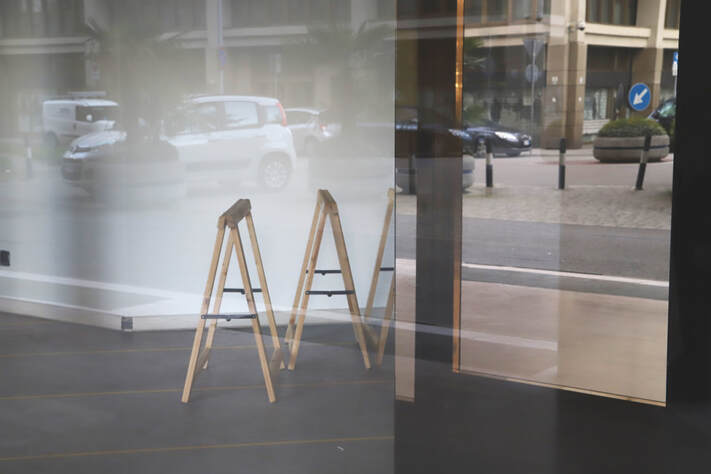 DIMORE OFF - the Civico 10 space before the artists' interventions
FFR: To go back to my previous question, what I was also aiming at is your intention to open up beyond the usual audiences of the contemporary. Usually when I say “I’m going to a residency” people look at me as if I was a weirdo and say “what’s that?” Especially if I go elsewhere, people think more of vacation. But then you have to explain that being an artist is work, which is even more difficult! But yes, the idea was that maybe doing a residency without displacement could at least reconcile the common meaning and the artistic meaning and operate a displacement, but a semantic one. I’m losing myself in divagation…
FFR: And the residency lasts 10 weeks, right?
​FFR: How did you select the tutors and the keywords?
FFR: Thousands of people were dying…
FFR: I have the impression that in your work at large you aim at some sort of professionalization. I feel it is an ambivalent element: on the one hand it is important to affirm that art workers are professional, therefore their labour must be respected as such, but on the other hand in my personal experience that professionalization often means that an artist goes for a three month residency, at the end of which they realize an artwork and that’s it, this sort of “being professional.” What do you think of this?
​FFR: About this dimension of being a public institution. Elena was saying before that the freedom you have is given by the fact that you’re a public institution rather than a commercial one. Public institutions very often ask for an outcome, an artwork, an event… How to balance these requests with the unproductive attitude?

FFR: You’re lucky!
FFR: Unfortunately not : /
FFR: Yes, but I noticed that there’s a difference between the first outcome and the second,
it looks more relaxed now, no?
FFR: Oh yes, there’s a big difference, to practice is a very different level…
​FFR: And connecting with what Stefania was saying about random people passing by the website, I’d like to avoid the idea of the audience as a vague monolithic bloc. Do you have a precise idea of what sort of audiences you’re addressing with this work?
FFR: And with people!

DIMORE - collective session with tutor Elena Mazzi on "identity"
FFR: But beyond the quantity, I am personally interested in the quality of the audiences. I understand that a politician could be more interested in knowing how many people watched the live streaming, but if out of a hundred people you actually got six interested, I’d be more interested in understanding those six people, because this is what creates something, is “effective” in a social way.
FFR: LOL
​DIMORE still unfold in a multiform way, its threads can be found on DIMORE.

Interview with the DIMORE curatorial team (Stefania Schiavon, Caterina Benvegnù and Elena Squizzato) by Enrico Floriddia on behalf of FFR and edited by Rebecca A. Layton.